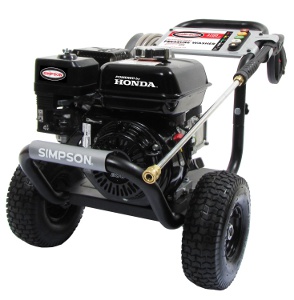 The Simpson PS3228-S Powershot with a Honda gas engine is one of the most popular commercial pressure washers on the market today. Offering an unbeatable combination of durability and versatility, the PowerShot is the first choice of those who clean for a living. Whether it’s removing algae from the vinyl siding of a lake home, cleaning graffiti from concrete walls in a city or used in conjunction with other professional cleaning services, the PowerShot is always up to the challenge. With its welded steel frame that’s made to withstand the rigors of a professional cleaning business to its large pneumatic tires that easily roll over any surface, Simpson has delivered a pressure washer that can do it all. With retail prices hovering around $1,200 it can often be bought for half that price from leading online retailers such as Amazon.com. While some people may feel the price is a bit high, the testimonials of those who have used it demonstrate it’s a machine that’s well worth the investment.

Cleaning Power: Offering 3200 PSI and 2.8 GPM make the PowerShot one of the most powerful pressure washers available. Built with an industrial-strength plunger pump that results in higher pressure at the nozzle, it provides a greater impact upon the cleaning surface than similar pressure washers of the same torque and horsepower. Based on its ability to clean most any surface quickly and easily without fear of damage, we give it 5 stars.

Features: Equipped with a commercial-grade Honda GX200 gas engine, the PowerShot delivers a high output of power while being very easy to start. A very smooth-running engine, it comes with the Oil Alert feature to make sure its user is always aware if oil needs to be added.

However, what makes the PowerShot so powerful is its AAA industrial triplex plunger pump, complete with ceramic coated pistons and PowerBoost technology. Creating higher pressure at the nozzle, it easily surpasses the power of most other machines using similar torque and horsepower.

Another great feature is the hose. Approximately 25 feet long, its poly-braided design is non-marring while being kink and abrasion resistant. Equipped with easy connectors, it can be easily used without fear of having valuable time taken away to get it untangled. Yet, what makes this pressure washer perhaps the best out there is its pro-style spraying wand. Equipped with five stainless-steel quick connect nozzle tips ranging from 0-40 degrees, it also comes equipped with a soap applicator to make cleaning even easier. Based on these features and its performance, the PowerShot gets another 5 star rating.

When it comes to a long-lasting machine, the PS3228-S has established itself as one of the best. Many commercial pressure washing businesses that have established themselves in recent years have reported no problems with this model, and also report using it on a daily basis for several years without any mechanical problems. A few users have reported the engine can be somewhat hard to start at times, so that’s something to be aware of prior to purchasing. Overall, few significant problems have been reported with this model, and most who have purchased it once say they would do it again if needed. Due to these high recommendations, we give it 4 stars.

For most people, the cost of the unit has not been an issue. While the list price of almost $1,200 may seem high to some, we don’t think so. Since most people are purchasing this as part of their business inventory, the price seems very reasonable. Most units purchased tend to remain in service for many years before needing any significant servicing, so those using it in pressure washing and other businesses seem to be very willing to pay for quality. Since most units can be bought for $500-$600, we give it 4 stars only because some people have complained about it being priced somewhat high.

For an overall score, the PowerShot got 4.5 stars. While scoring well in all areas, it did have some concerns raised by a few users, such as the engine being hard to start at times and the occasional problem with a nozzle popping out while in use. However, these issues were few and far between, so in our opinion the positives far outweigh the negatives when it comes to the PS3228-S. Some people did report the oil levels were low when they first purchased the PowerShot, but so long as this is checked prior to using it there should be no problems. Overall, those who bought this model for commercial or residential cleaning seem very satisfied with its performance, so we have no problem rating it high as well.

This is a durable and reliable machine that has a much bigger upside than downside. It’s ability to clean multiple surfaces easily, combined with its easy to follow instructions and long-lasting performance make the PowerShot one of the best deals among today’s many models of pressure washers.